Share
For the people who loves to travel, they always look for solemn places to spend time and appreciate the nature.
But the danger with comes along with these kind of experiences. Yesterday, a breaking news about a tourist originally from Taguig City was said to be drowned from snorkeling. It was the story that was published by the Philippine News Agency. 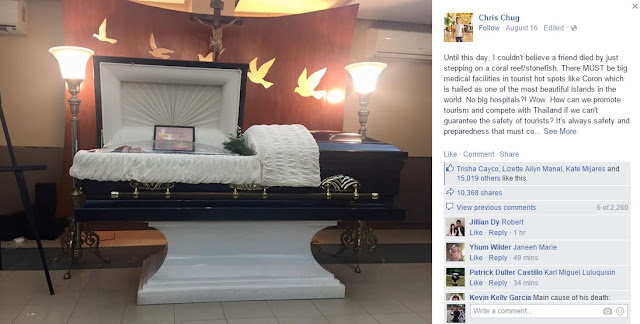 However, people claim that the story was not true. They said that Miguel Gabriel Ruiz stepped on a coral which caused him severe pain. It is said to be an effect of the stonefish poisoning. There have been no official reports yet. The case is still under investigation..
Now, the friends and family of the victims were questioning why the tourists personnel of Coron did not warn them about the possibility of encountering such poisonous sea creatures. The second concern is why isn’t the local government prepared for such emergencies. They should have the proper equipment to handle these cases.
Source: Chris Chug, Trending News Portal
Miguel Gabriel Ruiz stonefish poisoning 2015-08-22
Mucoa Despabeladero
Share